Four years ago, Coach @alfredtsg and his girlfriend @rhondagramz began their journey in powerlifting together. Since 2016, both Alfred and Rhonda have become important members of our community.  Rhonda is a two time CPU champion in her weight class, a true powerlifting success story.

Rhonda entered the sport of powerlifting with little background in competitive sport. As her and Alfred began their training together they also set out to conquer an important obstacle for safe and continued progress, scoliosis. Scoliosis is a lateral curvature of the spine, and it can vary in significance from case to case. Through Alfred’s careful management of Rhonda’s training technique and training stressors, her scoliosis has improved significantly with the help of strength training.

In her first IPF World Championship, Alfred & Rhonda achieved a 5th place finish with lifts of (120kg squat, 70kg bench, 132.5kg deadlift). After 2 years away from the platform, their next challenge will be in 3 weeks at the Canadian National Powerlifting Championships held in TSG’s hometown of Calgary, Alberta 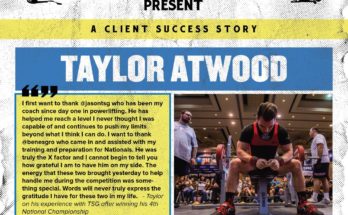 View all posts by Debbi →