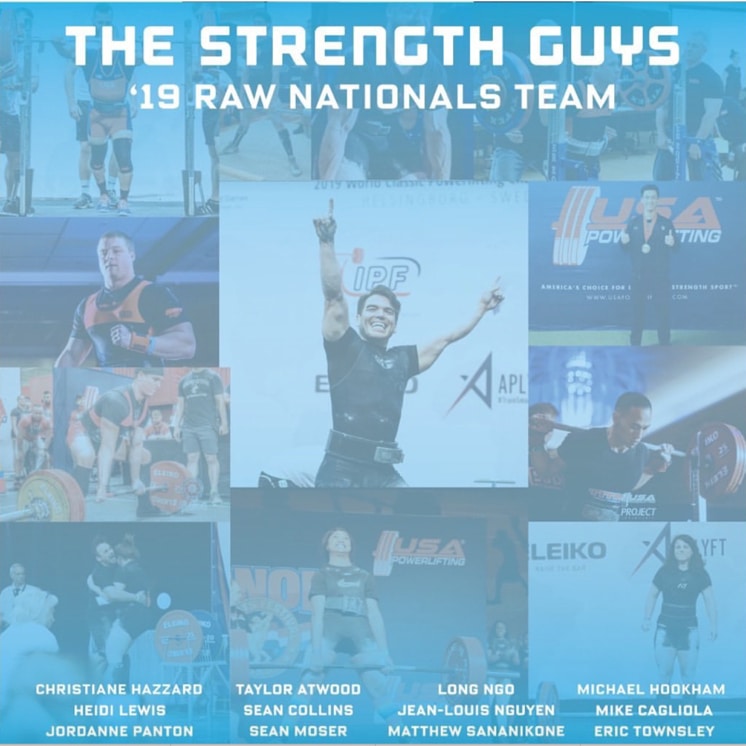 2019 USAPL Raw Nationals Team TSG is our biggest yet and four of our coaches will be in attendance. We look forward to supporting our athletes as they put their peak strength and skill on display at one of the top competitions in all of powerlifting.

Coming off of his 2nd IPF World Championship and his first Champion of Champions award, @t_atwood is looking to win his 6th National Championship in a row against an impressive line-up of 74 kg lifters. Taylor is healthy, fired up, and he’s been training harder than he ever has since the World Championship. He is coached by @jasontsg, @benesgro, his Dad, Scott Atwood, and his nutritionist @kedrictsg.

Coming off of his 2nd consecutive win at the Arnold Classic Pro American in the 93 kg division is @seanmoser19. Sean has been hard at work with coaches @jasontsg & @benesgro, and his nutritionist @kedrictsg both in-person and in the trenches on his own since the Arnold Classic where he is looking to improve on the 817.5 kg winning total which he posted back in March. Sean is one of the hardest workers on our team and we look forward to being there to support his efforts in a stacked 93 kg class.

Next up in the 83 kg category is relative newcomer to TSG, Sean Collins (@seantcollins24). Sean is coming off of a 762.5 kg Total at the Northeast Regionals in July. He started working with @benesgro & @jasontsg shortly after. TSG look forward to supporting Sean in his first competition as a member of our team against a highly competitive 83 kg class.

Next up for our team at Raw Nationals is Heidi Lewis (@heidistrong_). Heidi will be competing at Raw Nationals for the first time. She is coming off of her 3rd consecutive win at the IPF University World Cup and the Women’s Best Lifter of the World Cup award. Heidi is coached by @joncsw and @downing_powerlifting. We look forward to supporting her efforts on the platform in the 84 kg+ category.

Christiane Hazzard (@hazzardous_weights) will also be competing at Raw Nationals for the first time. Coming off of her 2nd consecutive IPF University World Cup win, and setting the Junior National Record in Bench Press, Christiane will look to continue her stellar progress in a highly competitive 63 kg Junior class. She is coached by @joncsw and @downing_powerlifting.

Also competing for the first time at USAPL Raw Nationals is our sponsored Strength Gal, Jordanne Panton (@jordannepanton). Jordanne is a well-accomplished equipped lifter and she is the current record holder in the Equipped Deadlift at 230 kg as a 63 kg lifter. She has been working with our team of coaches to strengthen her skills in Raw Powerlifting for the past year. We’re excited for Jordanne as she’ll lift against stacked competition in the 63 kg Junior category. Jordanne is coached by @joncsw & @jasontsg.

Next up in our 2019 Raw Nationals team announcements is 3x M1 National Champion, Mike Cagliola (@mikecags66kg). Mike has been working under the watchful eye of @kedrictsg to prepare for competition in the M1 66 kg category. We look forward to being in Lombard, IL to support Mike’s efforts on the platform.

Since earning a Bronze Medal at the 2019 IPF World Championship, Eric Townsley(@muscl_town) has been training to defend his M1 74 kg National title with @jasontsg. Eric will be handled at Raw Nationals by our friend, @mlgary72. We look forward to supporting his efforts on the platform in Lombard, IL.

Up next on our TSG lineup for 2019 USAPL Raw Nationals is Michael Hookham @michaelhookham . He has been working hard under coach Taylor Atwood and will be competing in the 83kg Open Class

We look forward to being in Lombard, IL to support Michael’s efforts on the platform.

Jean-Louis Nguyen @sirmax.a.lot , coached under Alfred @alfredtsg , will take the platform at 2019 USAPL Nationals in the 74kg Open class. He has been hitting some huge PRs and we are excited for the platform fire.

From the State of Connecticut, TSG athlete Long Ngo will be competing in the Mens Open 66kg class at 2019 USAPL Raw Nationals TSG Team

Long is coached by the powerful duo Jason & Ben. We look forward to being in Lombard, IL to support Long’s efforts on the platform

TSG Team Takeover everywhere! Matthew Sananikone @matthew_sananikone will be taking the platform at 2019 USAPL Nationals as a 66kg lifter. Matthew is a Junior lifter with a bright future in the sport and is coached by Jason @jasontsg

We look forward to being in Lombard, IL to support his efforts on the platform.

Check out our COACHING SERVICES or CONTACT US for more information